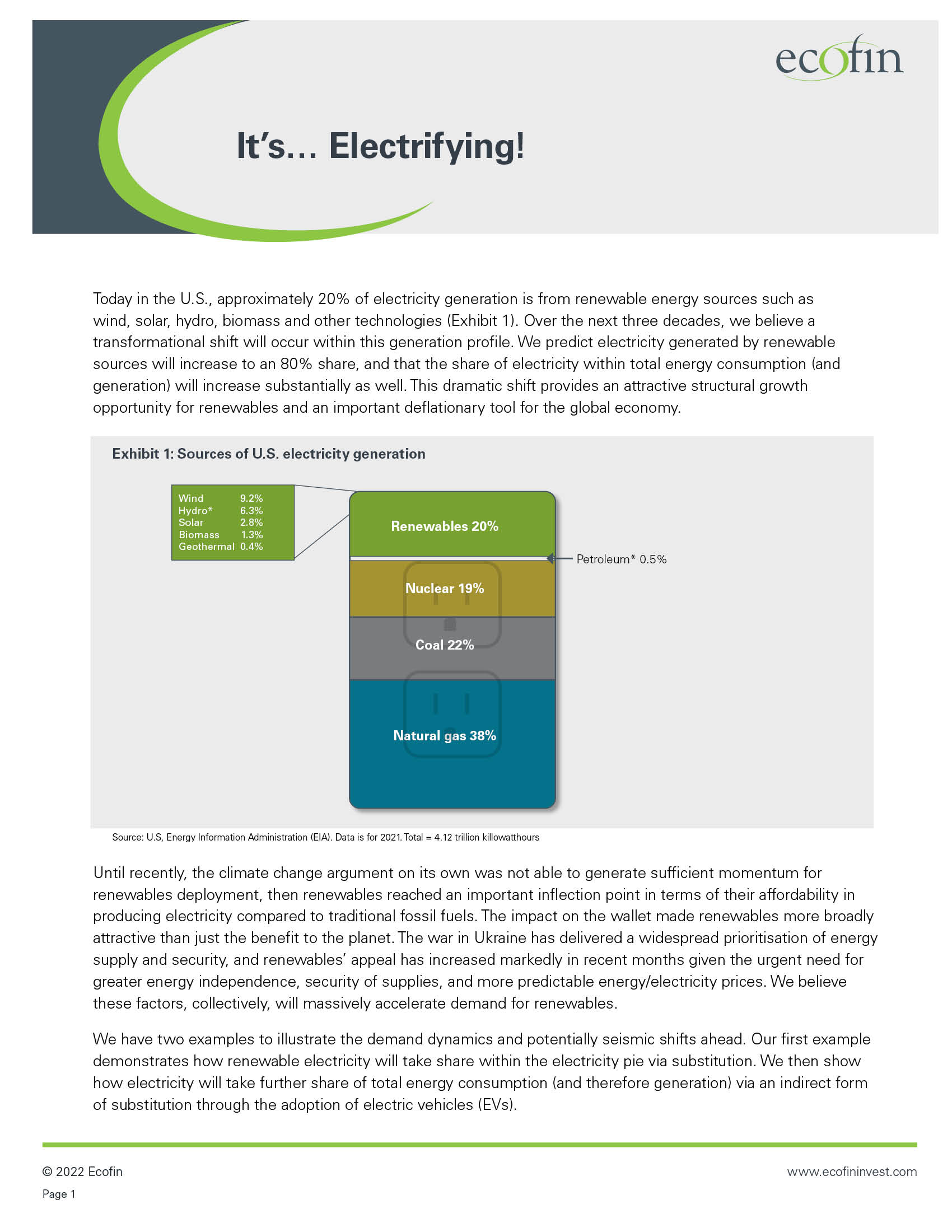 Today in the U.S., approximately 20% of electricity generation is from renewable energy sources such as wind, solar, hydro, biomass and other technologies (Exhibit 1). Over the next three decades, we believe a transformational shift will occur within this generation profile. We predict electricity generated by renewable sources will increase to an 80% share, and that the share of electricity within total energy consumption (and generation) will increase substantially as well. This dramatic shift provides an attractive structural growth opportunity for renewables and an important deflationary tool for the global economy. 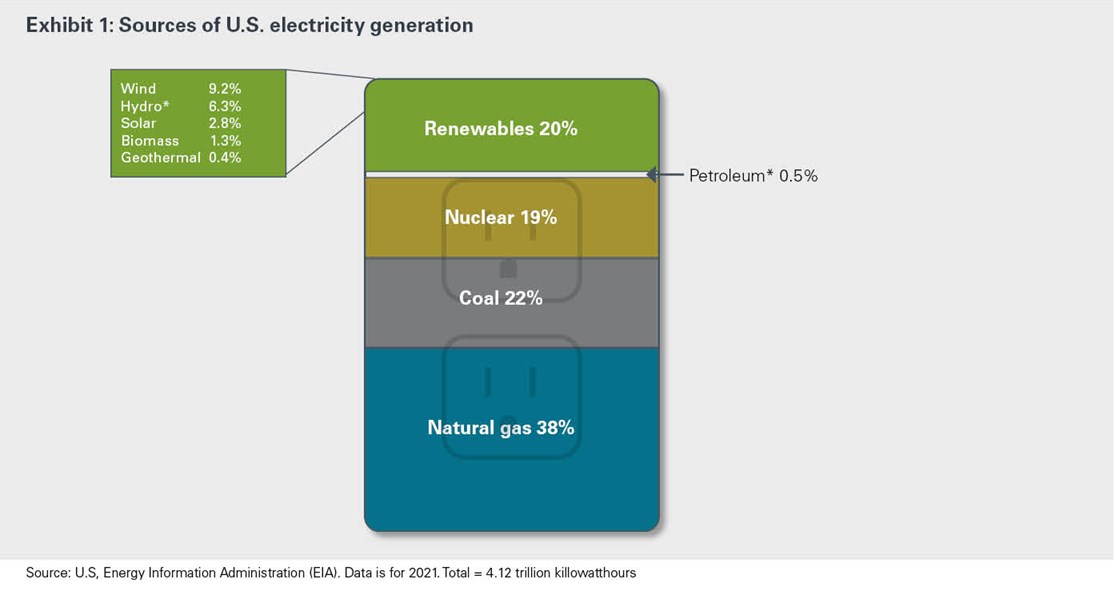 Until recently, the climate change argument on its own was not able to generate sufficient momentum for renewables deployment, then renewables reached an important inflection point in terms of their affordability in producing electricity compared to traditional fossil fuels. The impact on the wallet made renewables more broadly attractive than just the benefit to the planet. The war in Ukraine has delivered a widespread prioritisation of energy supply and security, and renewables’ appeal has increased markedly in recent months given the urgent need for greater energy independence, security of supplies, and more predictable energy/electricity prices. We believe these factors, collectively, will massively accelerate demand for renewables.

Example 1: Renewables as a substitute will grow its share of electricity generation to 80%

Coal is still the fuel source for 22% of the electric power produced in the U.S. (Exhibit 1). In 2021, 90% of coal supply was used for generating electricity (Exhibit 2). As coal continues to be replaced with renewable energy sources, renewables grow their share of electricity generation substantially, and likely more rapidly than previously anticipated. 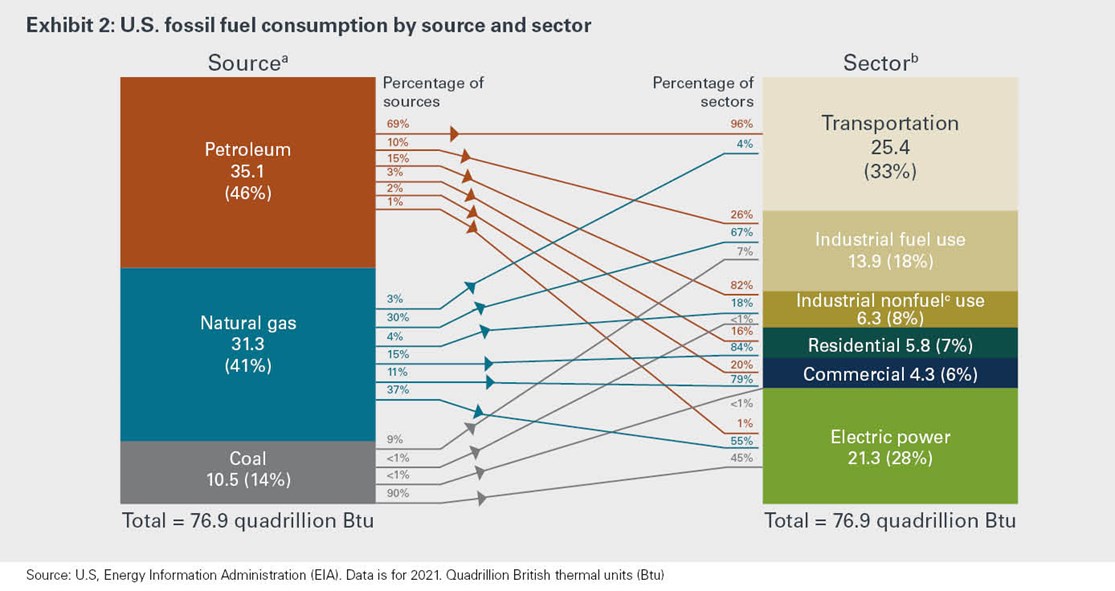 As illustrated in Exhibit 3, by 2030, a cumulative 92.5GW of coal capacity is expected to be closed, representing 44% of total coal plant capacity as of 2021 (210GW of coal capacity was operating in the U.S. in 2021. Source: EIA). Assuming a capacity factor of 30% (meaning how often a power plant is running at maximum capacity), which is equivalent to the 2021 average capacity factor for renewables, the total U.S. electricity system will need to add an estimated 149GW of renewables capacity to replace coal shutdowns (Exhibit 4), which represents 48% of the 312GW of renewables capacity in 2021.

In the above analysis, we make the implicit assumption that all coal would be replaced by renewables, which may be too ambitious, certainly in the near-term. Ultimately, however, even if some coal is initially replaced by natural gas, in the medium- to long-term we anticipate that all fossil fuels will eventually be replaced by renewables (for example, by retrofitting a coal plant into a biomass plant). We are comfortable making this prediction because renewable electricity is already cheaper than other forms of electricity in most parts of the U.S., and that gap has only increased given the higher cost of natural gas. Further, in the medium-term, various other growth factors, such as battery storage, grid build-out and distributed generation capabilities, should enable renewables to command a larger electricity generation share. These catalysts, coupled with the global need for energy security, should accelerate the migration to renewables.

Further, NextEra Energy, the leading utility company in the country, announced at its June analyst meeting that it will be Real Zero by 2045, i.e., the company will not use any coal or natural gas by 2045. This is a game-changer: NextEra skipped a net zero target and instead set a real zero target, confident it will not need any coal or gas generation by 2045. We should see a shift within the industry as other participants will be forced to follow suit to avoid being left behind.

The recent passage of the Inflation Reduction Act (IRA) provides the long-term visibility necessary for companies to undertake these investments in renewables and achieve attractive returns. It makes the case for coal substitution by renewables even stronger given the incremental cost differentials and, if anything, we believe coal closure schedules will be brought forward. It is therefore quite reasonable to begin considering a scenario of the U.S. electricity sector without coal or gas by the middle of the century.

Future growth in EV adoption should propel electricity’s piece of the energy generation pie. In 2021, 69% of petroleum was used for the U.S. transportation industry (Exhibit 2). Within transportation, 59% is burned by cars (Exhibit 5). Hence the migration from cars with internal combustion engines to EVs should have a substantial impact on oil demand as well as electricity demand.

We believe EV growth has reached an inflection point. Exhibits 6 and 7 illustrate our in-house projections for EV penetration and demand in the U.S., Europe and China. Historically, limited model availability constrained choice and affordability, and penetration was low. This landscape is changing, however, and Morning Consult estimates the number of EV models available in the U.S. will nearly triple between 2020 and 2023, in 3 years! We expect this expansion in availability to broaden affordability and lead to greater adoption.

The impact of adding EVs to the electricity consumption mix remains modest in the coming years given the low base. As EV sales increase, the cumulative impact on electricity demand starts to tick up and electricity becomes an even more substantial share of consumption (Exhibit 8).

In the context of a U.S. market that has seen no electricity demand growth in the past decade (Exhibit 8), EVs alone will drive growth within the electricity sector and will ultimately lead the sector to command a larger share of the total energy consumption/generation pie. EVs will also boost renewables demand as owners of EVs naturally would want to supply electricity from renewable sources. EV electricity consumption alone will require an additional 14% of renewables capacity by 2030 (compared to 2021) and 61% more renewables by 2040 (Exhibit 9).

Conclusion: Renewables growth is at an inflection point

Putting aside other economic growth factors, when solely analyzing coal and natural gas substitution together with EV growth, renewables capacity will have to multiply over the next 1-3 decades to keep up with market demand.

Projections and the slope of the demand curve might end up being different than initial estimates. We are confident though about the direction of travel for renewables. Renewables will become a substantial portion of the electricity generation mix and electricity will, in turn, capture a larger share of total energy consumption.

Additionally, with the passage of the Inflation Reduction Act (IRA), we believe there is a strong case to see an even further acceleration in the deployment of renewables and electric cars as incentives make them more attractive than alternatives. The IRA will propel renewables growth in the U.S. by incentivizing the entire renewable energy value chain, from equipment manufacturing to generation and storage assets, as well as green hydrogen. Green hydrogen is a potential game-changer for renewables demand too given its substantial potential in applications such as truck transportation, fertilizer and industrial use. Stay tuned as we examine green hydrogen in a further paper.