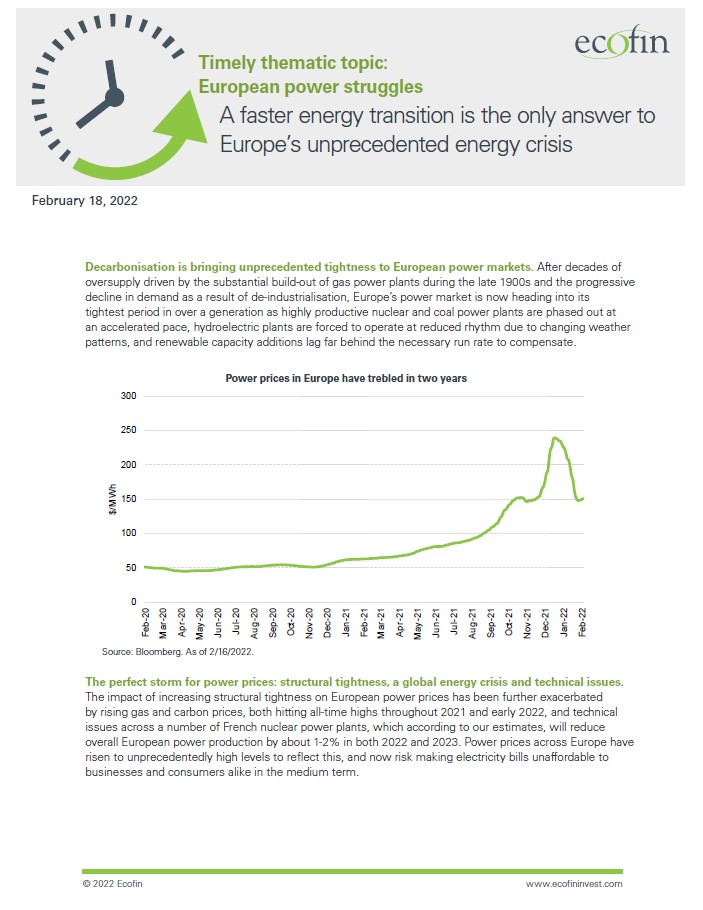 Decarbonisation is bringing unprecedented tightness to European power markets. After decades of oversupply driven by the substantial build-out of gas power plants during the late 1900s and the progressive decline in demand as a result of de-industrialisation, Europe’s power market is now heading into its tightest period in over a generation as highly productive nuclear and coal power plants are phased out at an accelerated pace, hydroelectric plants are forced to operate at reduced rhythm due to changing weather patterns, and renewable capacity additions lag far behind the necessary run rate to compensate.

Power prices in Europe have trebled in two years

The perfect storm for power prices: structural tightness, a global energy crisis and technical issues. The impact of increasing structural tightness on European power prices has been further exacerbated by rising gas and carbon prices, both hitting all-time highs throughout 2021 and early 2022, and technical issues across a number of French nuclear power plants, which according to our estimates, will reduce overall European power production by about 1-2% in both 2022 and 2023. Power prices across Europe have risen to unprecedentedly high levels to reflect this, and now risk making electricity bills unaffordable to businesses and consumers alike in the medium term.

Faster energy transition is the only sustainable solution. Governments across Europe have endeavoured to find quick fixes for the problem of rising electricity prices, some by reaching into the pockets of the utilities and some by shifting the financial burden onto taxpayers, neither of which represents a sustainable long-term solution. Accelerating the build-out of renewables, which more than ever in the current price environment have established themselves as the cheapest source of electricity by a wide margin, appears to be the only rational solution to achieve a structural reduction in power prices while meeting decarbonisation objectives. Greater renewable power production would also increase Europe’s energy independence by reducing its reliance on imported fossil fuels - an aspect whose intrinsic benefits are particularly pronounced at a time when geopolitical tensions are leading to significant uncertainty and volatility in energy markets.

Renewable are the cheapest source of electricity by a wide margin 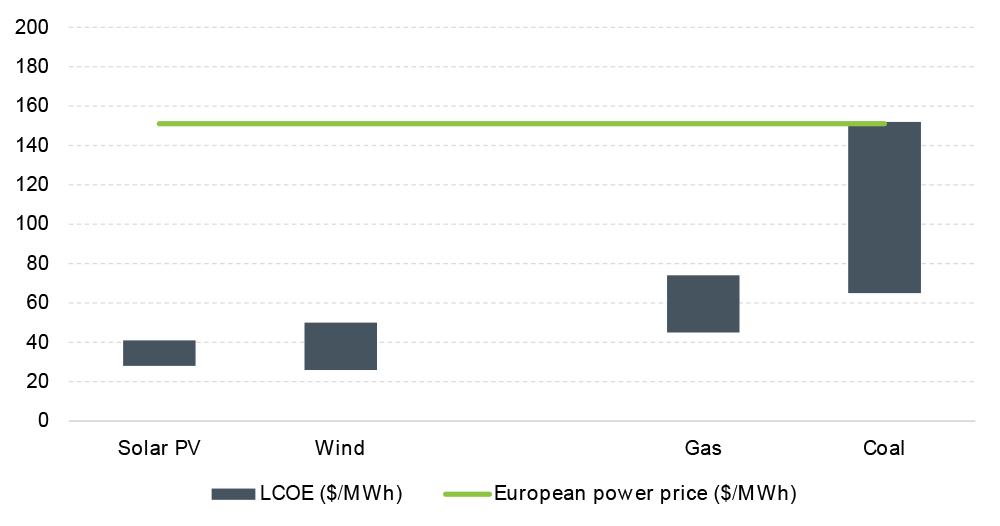 Necessity is the mother of invention. Significant challenges such as the energy crisis that Europe is currently engulfed often represent fertile ground for innovative solutions. In our view, the rational equilibrium that policymakers will reach in response to this crisis incorporates three key elements: 1) an acceleration of renewable capacity additions through more ambitious targets and more conducive regulatory environments (e.g. more frequent auctions, standardised frameworks for corporate PPAs); 2) the provision of necessary incentives to accelerate the buildout of enabling infrastructure for renewable integration, including greater high voltage interconnection and long-duration energy storage solutions such as hydrogen; 3) a review of market design with greater duration matching of prices and underlying production costs (i.e. fixed cost technologies like hydro and nuclear most likely moving off marginal cost pricing and onto long-term contracts).

Disclaimer: Nothing contained in this communication constitutes tax, legal, or investment advice. Investors must consult their tax advisor or legal counsel for advice and information concerning their particular situation. This communication contains certain statements that may include “forward-looking statements.” All statements, other than statements of historical fact, included herein are “forward-looking statements.” Although Tortoise believes that the expectations reflected in these forward looking statements are reasonable, they do involve assumptions, risks and uncertainties, and these expectations may prove to be incorrect. Actual events could differ materially from those anticipated in these forward-looking statements as a result of a variety of factors. You should not place undue reliance on these forward-looking statements. This communication reflects our views and opinions as of the date herein, which are subject to change at any time based on market and other conditions. We disclaim any responsibility to update these views. These views should not be relied on as investment advice or an indication of trading intention. Discussion or analysis of any specific company-related news or investment sectors are meant primarily as a result of recent newsworthy events surrounding those companies or by way of providing updates on certain sectors of the market. Ecofin, through its family of registered investment advisers, does provide investment advice to Ecofin related funds and others that includes investment into those sectors or companies discussed in this communication. As a result, Ecofin does stand to beneficially profit from any rise in value from many of the companies mentioned herein including companies within the investment sectors broadly discussed.

Past performance is no guarantee of future results.