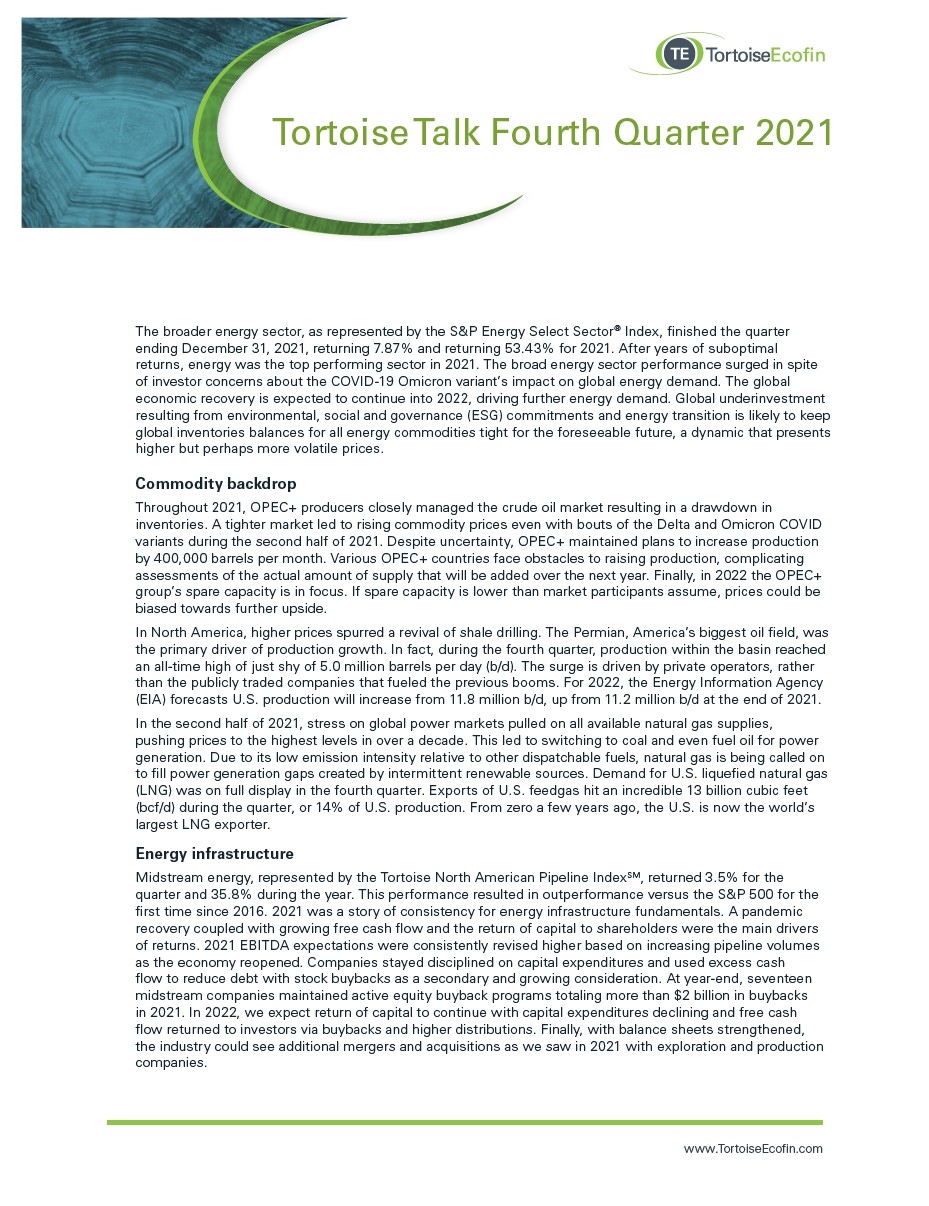 The broader energy sector, as represented by the S&P Energy Select Sector® Index, finished the quarter ending December 31, 2021, returning 7.87% and returning 53.43% for 2021. After years of suboptimal returns, energy was the top performing sector in 2021. The broad energy sector performance surged in spite of investor concerns about the COVID-19 Omicron variant’s impact on global energy demand. The global economic recovery is expected to continue into 2022, driving further energy demand. Global underinvestment resulting from environmental, social and governance (ESG) commitments and energy transition is likely to keep global inventories balances for all energy commodities tight for the foreseeable future, a dynamic that presents higher but perhaps more volatile prices.

Throughout 2021, OPEC+ producers closely managed the crude oil market resulting in a drawdown in inventories. A tighter market led to rising commodity prices even with bouts of the Delta and Omicron COVID variants during the second half of 2021. Despite uncertainty, OPEC+ maintained plans to increase production by 400,000 barrels per month. Various OPEC+ countries face obstacles to raising production, complicating assessments of the actual amount of supply that will be added over the next year. Finally, in 2022 the OPEC+ group’s spare capacity is in focus. If spare capacity is lower than market participants assume, prices could be biased towards further upside.

In North America, higher prices spurred a revival of shale drilling. The Permian, America’s biggest oil field, was the primary driver of production growth. In fact, during the fourth quarter, production within the basin reached an all-time high of just shy of 5.0 million barrels per day (b/d). The surge is driven by private operators, rather than the publicly traded companies that fueled the previous booms. For 2022, the Energy Information Agency (EIA) forecasts U.S. production will increase from 11.8 million b/d, up from 11.2 million b/d at the end of 2021.

In the second half of 2021, stress on global power markets pulled on all available natural gas supplies, pushing prices to the highest levels in over a decade. This led to switching to coal and even fuel oil for power generation. Due to its low emission intensity relative to other dispatchable fuels, natural gas is being called on to fill power generation gaps created by intermittent renewable sources. Demand for U.S. liquefied natural gas (LNG) was on full display in the fourth quarter. Exports of U.S. feedgas hit an incredible 13 billion cubic feet (bcf/d) during the quarter, or 14% of U.S. production. From zero a few years ago, the U.S. is now the world’s largest LNG exporter.

Midstream energy, represented by the Tortoise North American Pipeline IndexSM, returned 3.5% for the quarter and 35.8% during the year. This performance resulted in outperformance versus the S&P 500 for the first time since 2016. 2021 was a story of consistency for energy infrastructure fundamentals. A pandemic recovery coupled with growing free cash flow and the return of capital to shareholders were the main drivers of returns. 2021 EBITDA expectations were consistently revised higher based on increasing pipeline volumes as the economy reopened. Companies stayed disciplined on capital expenditures and used excess cash flow to reduce debt with stock buybacks as a secondary and growing consideration. At year-end, seventeen midstream companies maintained active equity buyback programs totaling more than $2 billion in buybacks in 2021. In 2022, we expect return of capital to continue with capital expenditures declining and free cash flow returned to investors via buybacks and higher distributions. Finally, with balance sheets strengthened, the industry could see additional mergers and acquisitions as we saw in 2021 with exploration and production companies.

On the legislative front, the Congressional infrastructure bill passed in November. Hydrogen received significant funding with targeted development of regional hubs presenting growth opportunities for energy infrastructure companies. Of more significance is the outcome of climate change legislation. If a bill is passed in 2022, it will likely focus more on tax credits rather than more restrictive, comprehensive climate policies. We believe the bill will also include regulatory support for existing infrastructure. For example, the expansion of Section 45Q tax credit would incentivize more widespread carbon capture adoption for harder to abate sectors such as steel, cement, and chemicals.

On the regulatory front, demand for low-cost U.S. natural gas created a need for additional natural gas pipelines and LNG export terminals. In the northeast Marcellus Basin, pipeline infrastructure is constrained. Despite this need, the regulatory environment remains incredibly challenging as evidenced by the recent cancellations of the Atlantic Coast Pipeline and the Constitution Pipeline. The one major pipeline under construction is the Mountain Valley Pipeline. The long-haul natural gas pipeline received key water permits during the fourth quarter but still has hurdles to overcome before becoming operational. While LNG export facilities take time to construct, with the largest outstanding LNG opportunity, Cheniere Energy expects to advance their Corpus Christi stage 3 in 2022, once remaining investment and commercial parameters are met. Finally, Enbridge received final regulatory approval on its Line 3 crude oil pipeline project and started moving volumes during the fourth quarter, making it the largest crude oil project to come online in 2021.

Several events in 2021 reminded investors how critical energy infrastructure is to daily life. Notable events like Winter Storm Uri in Texas, the cyber-attack of the Colonial Pipeline, Hurricane Ida in the Gulf Coast, or U.S. LNG cargoes rapidly replenishing Europe’s low gas storage levels via LNG tankers all argue towards a holistic view towards energy transition. With the understanding that fossil fuels will remain critical to the economy for decades, we believe focusing on decarbonizing existing infrastructure is the best approach to reducing emissions.

Midstream companies concentrated on decarbonization throughout 2021. Sustainability reports included more granular detail than previous annual reports, net-zero emission targets were established, pledges were made to reduce methane intensity, and companies engaged with projects and growth opportunities around energy transition. Energy transition projects support the longevity of existing assets and cash flow growth. Fuels including carbon (through carbon capture and sequestration), hydrogen, renewable diesel, and renewable natural gas all create a pathway to a lower carbon future. Repurposing existing pipelines significantly reduces the capital expenditures versus building a new pipeline as we expect energy infrastructure companies to take advantage of the existing infrastructure already in the ground.

With inflation increasing throughout the year, many investors began to recognize midstream as an asset class with inflation protection. Pipelines typically have long-term contracts with inflation protection from regulated tariff escalators. Additionally, tariffs on regulated liquid pipelines typically include an inflation escalator. This allows increases aligned with the Producer Price Index (PPI) offering some protection from inflation. Through November 2021, the PPI increased by 9.0% from the prior year which could be a material driver of cash flows in 2022.

As the world economy continues to reopen, the energy sector is positioned for a reflation around increased energy demand. The focus continues to be on companies with strong balance sheets and exposure to the most competitive basins for hydrocarbon production, including the Permian and Marcellus basins. We also continue to emphasize export infrastructure, both LNG and liquefied petroleum gas (LPG).

The downstream portion of the energy value chain continues its recovery from the COVID-19 pandemic. The EIA sees refined product demand increasing 3% year over year driven largely by increases in jet fuel. U.S. demand for gasoline and distillate normalized in 2021 relative to 2019 levels while jet fuel demand is still down from pre-COVID levels. The natural gas liquids backdrop is strong entering 2022. NGL prices have been elevated on favorable fundamentals including constrained supply and low stockpiles. There has been particular strength in LPGs (liquid petroleum gases) where demand is driven by global population growth and improvements in living standards in Asia, notably in China and India.

The renewables sector had a difficult year in terms of share price performance –in part due to the starting point left by large gains from 2020. After being recognized in 2020 as a larger secular growth sector than previously realized, some near-term challenges to fundamental momentum emerged. A combination of fears around equipment cost inflation and its impact on development project returns, rising interest rates and their impact on discounted cash flows, and COVID-related development and construction delays and their impact on the pace of growth all conspired to question the robustness of the growth story. Consequently, concerns about near-term earnings growth prospects emerged for some companies, leading to negative near-term revisions, with attendant share price weakness, especially for smaller companies and unregulated companies who have less offsetting predictable businesses that provide greater visibility into their growth prospects.

At the same time, the sector saw improved policy frameworks in some emerging markets (particularly in China) but lost some momentum on the policy front in certain developed markets, which also had an adverse impact on the sector and the strategy. The following developments from late in the fourth quarter are worth highlighting:

California Net Energy Metering 3.0 (NEM 3.0): NEM allows customers who generate their own energy to receive a financial credit on their electric bills for any surplus energy sent to the grid. The Californian Public Utility Commission (CPUC) reviewed the financial benefit received in particular by rooftop solar customers and its proposed decision (NEM 3.0) was worse than expected, with lower prices for excess power and particularly with regard to a “connection fee”, which would introduce a new monthly fixed cost for future rooftop solar owners to remain connected to the grid. The reaction of the stocks exposed to rooftop solar reflected that worse-than-expected proposed decision. The final decision on NEM 3.0 is due at the end of January at the earliest. It is unlikely that the final decision will be even more onerous on the rooftop solar industry, and there is a chance that after the consultation period the outcome could be either neutral or improved relative to the proposal.

Build Back Better (BBB): The proposed U.S. BBB bill seems to be highly uncertain at this stage, due to objections from Senator Joe Manchin, whose vote is needed for passage. This development late in December was negative for investor sentiment across much of the energy transition space as the bill was not only a targeted form of financial support for renewables, storage, green hydrogen and electric vehicles, but importantly also signalled a somewhat unprecedented U.S. intent to accelerate decarbonization. We believe that current incentive policies such as the solar ITC (Investment Tax Credit) and wind PTC (Production Tax Credit) have a higher probability to be extended through a tax extenders package should BBB fail to be enacted in any form. However, policies that require new legislation – such as green hydrogen subsidization, Carbon Capture & Storage (CCS) incentives, standalone storage ITCs, domestic manufacturing credits – have a lower probability of making it into subsequent legislation, thereby removing the odds of an important positive catalyst. As with all political negotiations, these situations are fluid and could break in either direction.

Assessing the energy transition strategy from a medium-term perspective, we continue to see an attractive growth trajectory.

We are extremely optimistic about our essential asset investments for 2022 and well into the future. It appears that the end may be in sight on the global pandemic, which will support increased pent-up demand for the assets in which the funds invest. There are indications of global acceptance that natural gas should be included as a sustainable energy source along with renewables and an investment option as energy transitions. Despite some near-term macro and policy uncertainties, the trajectory of themes within the energy transition strategy remains on track, and those growth drivers translate largely to fundamentally attractive earnings growth for the companies in which we invest. We believe that all of these catalysts will lead to strong returns for 2022 and beyond.

The Tortoise North American Pipeline IndexSM is a float-adjusted, capitalization-weighted index of pipeline companies (MLPs, corporations, LLCs) domiciled in the U.S. or Canada. The S&P Energy Select Sector® Index is a modified market capitalization-based index of S&P 500 companies in the energy sector involved in the development or production of energy products.

It is not possible to invest directly in an index.